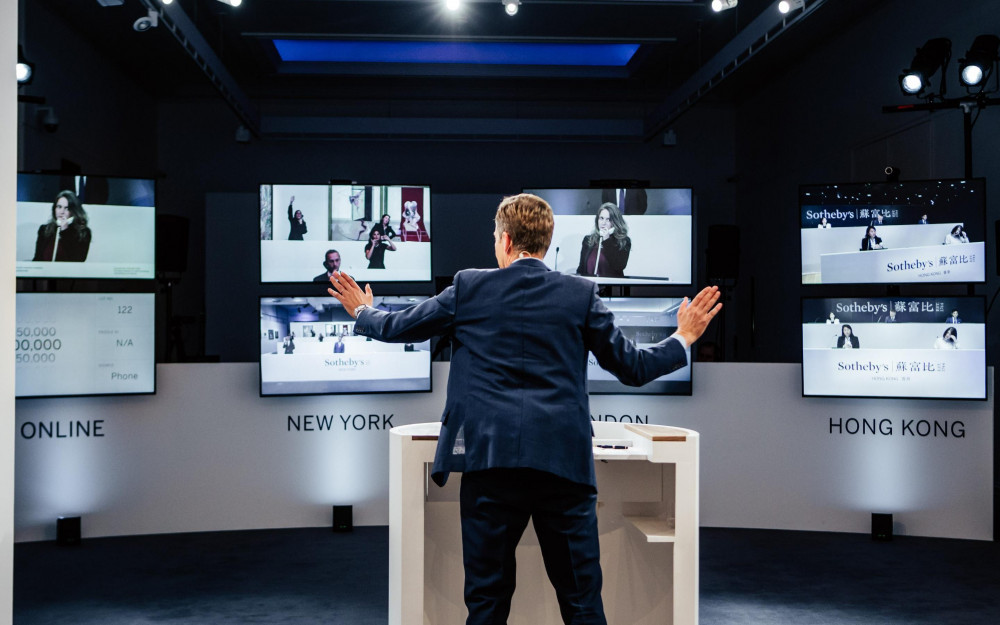 Chairman and Head Auctioneer Oliver Barker at the live broadcast of the New York Evening Sale | Image: The Telegraph

Globalisation as an opportunity

Whether it's Chrisite's "ONE" auction or the live broadcast of Sotheby's "Modernités/Contemporary" on the French television channel Museum TV - the crisis calls for new opportunities.

Hybrid auctions, which can be followed live via the internet in parallel to the hall auctions and thus enable bidders to participate depending on their location, are by no means new. The only noticeable thing since the restructuring due to the COVID-19 crisis is that they have reached a new level of professionalism. In addition to directed camera productions and new, so-called relay concepts, as seen with some difficulty at Christie's "ONE" auction, the quality of the auction houses' online offerings is also on the rise. Those who, despite the lockdown, had access to an adequate database or even a professional photo studio, improved the internet presence of the properties and made it easier for potential buyers to form their own impressions online. Social media presences have been professionalized, previews made publicly accessible to all via VR tours or 3D spaces - a novelty.

What will remain after the crisis is the desire to be able to survey the international auction market and the accompanying range of online auctions. The new flexibility will not be able to replace the atmosphere and excitement of the hall auctions in the coming years. However, it is a chance to offer an alternative model that will appeal to the new generation of collectors in particular. It shows that more than 71% of the under 35-year-olds use internet platforms such as Artsy, Artnet or SaatchiArt not only to buy, but also increasingly as a source of information. Artnet alone recorded on November 2020 a 51% increase in their Web-Traffic statistic.

It is therefore essential for auction houses to strengthen their online presence in international comparison. The influence this has on the new generation of buyers is also pointed out in the 2020 published Hiscox Art Trade Report. Here, the trust and interest of the so-called Millennial Buyers in online-only auctions was 60%, which ultimately led to 53% of this group purchasing a large proportion of their works through online auctions.

Even if the turnover of online auctions, especially at the two biggest houses - Christie's and Sotheby's - could not come close to the turnover of their live auctions, Guillaume Cerutti, CEO of Christie's, is quite positive with regard to 2021. In particular, he sees the globalization of the (online) market and the acquisition of a new young collectors as a great opportunity for the future auction trade.
Go to top keyboard_arrow_up