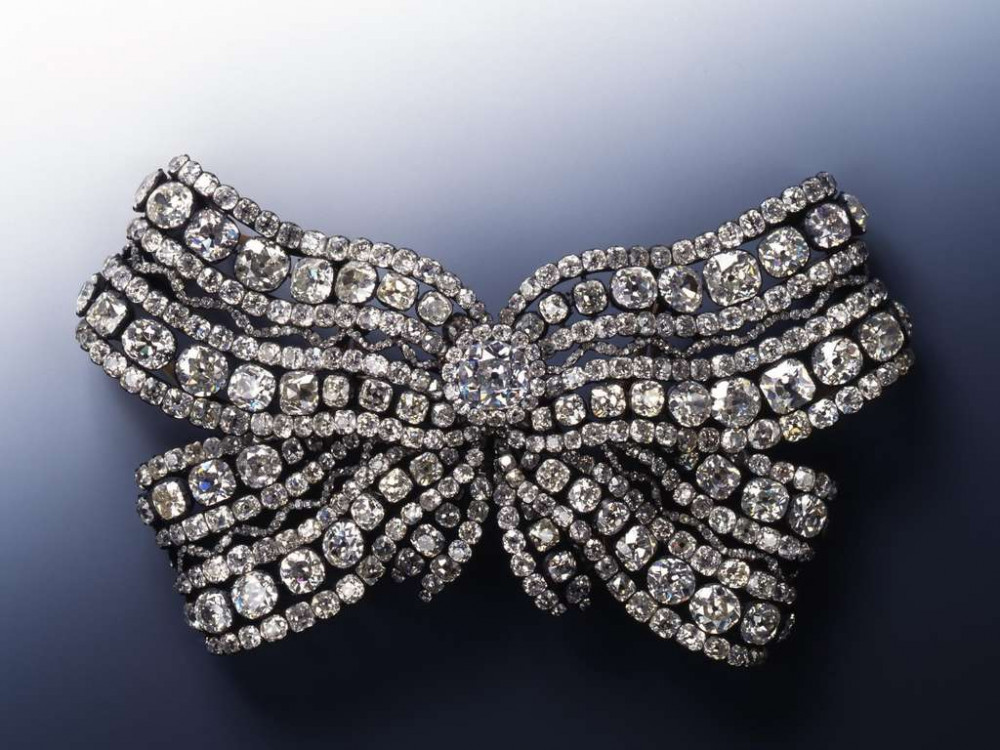 One of the looted cultural treasures: The breast bow made from the jewelry of the queens. © dpa / Grünes Gewölbe

After the theft of a total of eleven complete and a dozen pieces of historical jewellery from the Green Vault in Dresden (Germany) in 2019, three perpetrators were arrested after a raid in Berlin.

The appointed special commission „Epaulette“ concentrated on the Berlin district Neukölln, where, in addition to the search, they arrested three members of the so called „Remmo-Clan“, which is already known to the police. The unusually elaborate operation, which took place on November 17th and involved more than 1600 police officers from eight federal states, was only able to determine various pieces of evidence and not the stolen cultural assets themselves.
The three alleged perpetrators have been arrested for aggravated theft and arson. One of the suspects is a Remmo-Clan member who was already convicted for „involvement in the theft“ in the case of the 100-kilogram gold coin from the Berlin Bode-Musuem in February 2020. However, an appeal was filed against the sentence.

Even one year after the Dresden Green Vault burglary, the media interest and the associated discussion about the security standard in museums in not getting any more quiet.
In an interview with the German media Deutschlandfunk Kultur, Minister of Cultur Monika Grütters says in the relation to the investigation that the problem of organized crime must be tackled „at the root“. Grütters does not go into detail about the problem of security conditions – as was recently observed in the vandalism case in four Berlin museums – and the precarious working conditions of the guards. In this interview, too, it become more clear that even governments seems to be overburdened by the problem and therefore takes refuge in euphemisms and idealizations.

The case also made waves in the art auction world. Henrik Hanstein, owner of the Auctionhouse Lempertz in Cologne, says that it is hardly possible to sell the objects in their entirety due to their high degree of popularity. According to the auctioneer, there is also the danger of destruction, as the perpetrators feel pressured by the medial and political interest.
Go to top keyboard_arrow_up